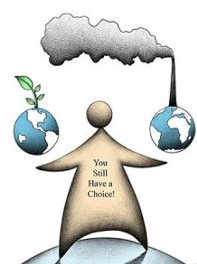 The Paris Agreement adopted at COP 21 on December 12, 2015, and ratified by the European Union on October 5, 2016, plans to maintain anthropogenic global warming, that is to say attributable to human activities, under the 2 degrees mark in 2100.  However, this agreement is not binding and only becomes binding through its transcription into national laws.

This limit of 2 degrees is defined in connection to the so-called pre-industrial era, that is to say corresponding to a reference situation of the year 1850 by convention. The choice of this value of 2 degrees is a compromise between the possibility of achieving it and the impacts of this warming, which are based on analyzes by the IPCC (Intergovernmental Panel on Climate Change). Thus, according to current knowledge, the consequences of a 2 degrees warming are considered controllable and therefore likely to be able to adapt to it.

Anthropogenic global warming results from the emission of Greenhouse Gases (GHG) by human activities, meaning economic activities, the main GHG being carbon dioxide (CO2). These emissions come mainly from the combustion of so-called fossil energy sources: coal, oil, gas, they have been constantly increasing since the pre-industrial era and currently reach 45 billion metric tons per year in net, that is to say after deduction of the part absorbed by the various natural sinks, in particular through photosynthesis. Once in the atmosphere, this surplus of GHGs remains there for centuries so that the concentration of CO2 in the atmosphere increased from 280 ppm (0.028%) in 1850 to 410 ppm (0.041%) in 2018, continues to grow and will continue to grow for decades no matter what action is taken. In other words, global warming is inevitable, it can only be limited.

To achieve the objectives of the Paris Agreement, it is necessary, to reduce emissions resulting from human activity by 4% per year for the next 30 years, on a global level, so as to achieve “carbon neutrality”. i.e. 0 net emissions in 2050.

To benchmark these values:

Thus, reducing GHG emissions by 4% per year in a globalized economy, where fossil fuel sources provide 85% of the primary energy consumed (34% oil, 27% coal, 24% natural gas - Statistical Review of World Energy 2019) requires a collective effort because each product, each service, each economic activity without exception, leads to the combustion of fossil fuels, whether for its manufacture, marketing, operation or use.

The services offered by IPSIDE are no exception, and as part of a collective effort everyone shall do its part.

Carbon footprint is the quantity of GHG emissions (in terms of CO2 equivalent) that is required for the achievement or even the existence of an economic activity. It can be defined for a product or a service, over all or part of its life cycle.  Economy and GHG emissions being closely connected, the carbon intensity of an activity defines the quantity of CO2 emitted to generate a unit income. Thus, on a worldwide average, 330 grams of CO2 are currently emitted to generate $ 1 of GDP (World Bank data https://data.worldbank.org/indicator/EN.ATM.CO2E.PP.GD)

IPSIDE provides a service activity. But this service activity has the particularity of "producing" intangible goods such as industrial property rights: brands, patents or design patents ...

Thus, in the same way as for a product, the carbon footprint of a patent or a patent family can be assessed.

IPSIDE has therefore started a process aimed at determining the carbon footprint of its activity: this process is useful for IPSIDE in the analysis of its capabilities of reducing its own carbon footprint;

but also to determine the carbon footprint of its "products" i.e. a patent family (to start with): this approach is especially useful for IPSIDE customers and shows that a patent portfolio bears a weight of carbon, independently of the technologies covered by said patents and of their actual use: direct exploitation, licensing, or any other commercialization strategy, those commercialization activities having their own carbon footprint but being dependent on the  considered technology.

To this end IPSIDE relied on the expertise of a specialized firm: Carbone4 (  http://www.carbone4.com/  )

Main conclusions: 1 € before tax spent at IPSIDE in patent matters, whatever the proceedings, produces an emission of 30 grams of CO2. From this value it is easy as a customer to determine the carbon footprint of its patent activity or its patent portfolio.

On IPSIDE side, a detailed analysis of the sources of emissions shows us the possibility of reducing them by around 20%, which leads to a reduction of about 75 metric tons per year. Beyond that, to achieve carbon neutrality, we will probably have to carry out compensation measures.

Compensation consists in making a financial valuation of CO2 emissions and in financing actions up to this value aiming at reducing or to the capture of CO2, carried out by other actors, leading to a net reduction at least equal, and ideally higher, than the CO2 emitted by IPSIDE. More to come on this subject in the coming months.

Note that since May 20, 2020, the National Intellectual Property Administration of China (CNIPA) announced that it had recently granted, for online trademark applications, the possibility of designating product labels or non-standard services. Indeed, this option was only reserved for trademark registration, on paper.

As you know, it is conventionally possible to designate the products and services from the list listed in the NICE classification. The latter has an indicative value, it can turn out in some cases to be incomplete or imprecise depending on the specificity of your activity. It is for this reason that it is strongly recommended to specify the products and / or services that will be used under the registered trademark.

Note that the Chinese Office may issue refusals for non-standard products or services, with requests for changes or clarifications.

IPSIDE has obtained the Committed CSR label at the "Efficiency" level thanks to its recognized practices in terms of Corporate Social Responsibility (CSR).

This label, recognized internationally and valid for a period of 3 years, was awarded following an assessment of the company's CSR strategy through various criteria such as environmental policy, territorial development, social dialogue or governance.